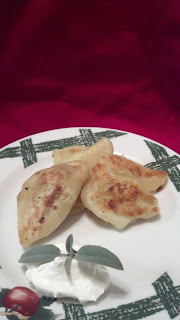 Perogies, Yum. For those of you who have never had them they are  a polish dish somewhat similar to a ravioli. They are typically filled with mashed potato and onion. Many times they have cheese included. They are most often browned in a hot skillet with butter after being boiled. They can be found in the frozen section of many grocery stores, but it is easy to make your own.

The recipe I used was quite simple

mix the ingredients together in a bowl until it begins to come together in a ball
Turn out the dough onto a floured surface and knead into a ball working it until it quits sticking to your hands. cover and refrigerate at least 30 minutes (can be held for 2 days)

Roll out the dough to 1/8 inch thickness
cut with a glass or a 2-3 inch round  cutter
Place about 1 Tablespoon of filling  (see below) on one half of the dough round
fold the other half over the top and pinch the edges to seal.  be sure to seal tightly so the potato mix does not leak out
can be cooked right away or can be refrigerated a day, or frozen up to 2 months
makes about 20 perogies

To cook perogies drop in a large pot of boiling water and let cook until they float to the surface about 6-8 minutes (8-10 if frozen)  It is typically served with sourcream,  sauted onions, and sometimes bacon.

I used leftover mashed potatoes from a previous meal. I added finely chopped onons sauted in butter and grated cheese