Barley there is more to it then soup and beer 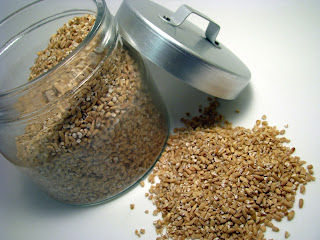 
Barley is one of the oldest grains in the world.  It has been found in ancient ruins all across the globe.It can be grown quickly in a variety of climates.It is a staple of life in many countries. The United States barley crop is primarily used as animal feed and in the Beer making industry. We as Americans could really benefit from this grain if we would start eating it instead of drinking it.

How to buy and store barley.

Store tightly covered in a cool dark place. Some prefer to store in the fridge or freezer. Keep it in sight so you will be more prone to use it. Don't store it in the back corner of your pantry only to be found two years from now.

Whole or hulled barley has had only the husks removed, Pearl barley has been dehusked and then polished to remove the aleurone which covers the endosperm breaking it down into  white shiny "pearls" of goodness. Barley flakes have been  husked, then steamed and  rolled into a flat flake.

Most of the barley sold in the grocery markets around the country is pearled barley. Most of the recipes you will find call for pearl barley. It's availability  in most grocery stores makes it an easy place to start getting more whole grain goodness into your diet.

How to cook barley

Barley is typically cooked in a one to three ratio. One part grain three parts liquid It will soak up the liquid and expand to four times the original amount. One cup of barley will expand to make about four cups cooked. Cooking time can be shortened by about half by soaking at least five hours first.

Pearled barley's grain size can range from course to very fine. depending on how much polishing has been done to it. The cooking time can vary from  10 minutes on a very fine pearl  up to 60 minutes for the larger less processed kernels.
The whole barley takes a bit more time 90 minutes to cook. (30 in a pressure cooker)

Your typical large pearl barley will take about 35-40 minutes to cook on the stovetop. (15 minutes soaked)


1 cup large pearl barley
3 cups water or broth
bring to a boil and then simmer over a low heat for 35-40 minutes until tender.

This can be cooled and stored in the fridge for up to a week.  It is easily reheated into a casserole or tossed into a salad.

Below are some links with more information about barley and its great nutritional value. The links also include some wonderful sounding recipes.

how to cook barley + recipes

vegan coach how to cook barley