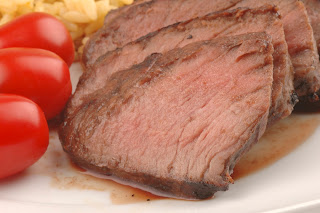 I love to cook meat and then extend it into several meals. A budget freindly cut of beef is the london broil. It is good eats and usually large enough to make several meals.

Meal 1 We made a large london broil. It turned out fabulous. We ate our fill for dinner along with some side salads.

Meal 2  We used the sliced beef to make a wonderful sandwich. We sliced a loaf of french bread in half and filled it with the meat, and piled on the toppings (avacado. peppers, onion, lettuce, tomato, olives)

Meal 3 Fajitas. Grilled meat with spicy peppers and onions wrapped up in a warm tortilla, what could be better than that.


If you have never had london broil or flank steak you are missing out on a great opportunity. These two cuts of meat give you alot of bang for your buck.

1. marinade
2. cook to a medium rare
3. slice thin against the grain

I marinated this last london broil for about 3 hours, I then cooked it on the grill. You could also broil it. (hence the name london broil)

A good rule of thumb for cooking flank steak and london broil is to cook it about 10 minutes for each inch of thickness. Typically they will cut london broil about 2 inches thick. (cook for  about 20 minutes) Flank steaks are usually a bit thinner 1 1/2 inches thick (cook for about 15 minutes)  Once cooked let sit for several minutes for the juice to settle back into the meat.

In simple terms. Meat is a muscle of the animal. It can be hard work for our teeth to tear through that muscle. The goal of slicing against (or across) the grain is to cut the muscle into short strands that are easier for us to chew. Look at the meat and you can see the muscle fibers. This is expecially easy to see in a flank steak or in the picture above (it was cut the wrong way just so you know). If you slice this steak in the same direction as those lines, you'll have to chew through the fibers; whereas if you cut through them, the knife will have already done that work. Think of it similarly to slicing a stalk of celery. The strings are less likely to get caught in your teeth if you cut those strings into smaller lengths. You want to cut the meat fibers (strings) into short edible peices. if you cut alongside the fibers, you end up eating something more like a rubberband instead of nice tender meat.

We love london broil and flank steaks. We love the versitility they provide for us. I love getting the most out of my food budget.