Is it an intolerance to wheat; or the processing of the wheat? 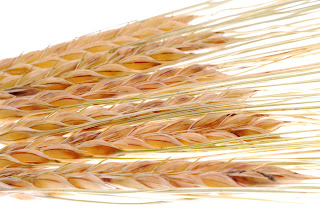 I keep hearing more and more about Celiacs disease and gluten intolerance.  I have come to believe that many people are not allergic or intolerant to wheat itself, they are having troubles because of the way it is processed.

I have been reading up about the processing of wheat into white flour. (I have included the best link below for describing this process) It is disgusting what is left once you take away all the good stuff.  We process the wheat into something that some would no longer consider food. They keep on changing and adding to the mix until they get a substance that is far from the wheat that it began as. Then we mix it and mash this stuff with a whole variety of other chemicals into the food -like substances that we find lining our supermarket shelves.

Ants and other insects do not recognize white flour as food. White flour kills them. Try it for yourself. Set out some white flour near an ant pile. Many will not even come close to the stuff. Those that  find the white flour will shrivel up and die after getting into it. We are being poisoned by white flour.  It is no wonder that people feel better when they get this stuff out of their diets.

Getting the white flour out is a challenge. You almost have to make everything from scratch.  Desserts made with whole grain flour are usually a flop. (I have been there.) White flour has been processed and created to behave in a certain way, whole grain flours do not have those same properties. Chef Brad has created a whole grain flour mix that can be interchanged with white flour with fairly good results. It is a mix of  spelt, brown rice, and pearl barley. I have used it with pretty good results.  I choose to eat fruit for dessert. I have found that I really do not love the cakes and cookies as much as I once thought. Fruit is sweet enough for me now days.


Getting the white flour out of breads, now that creates a whole new set of troubles. Nearly everyone will tell you that you have to have white flour to create the gluten to make bread rise and give it structure. I know many people who add a dough enhancer which contains gluten and several other chemicals to aid in the rising process.  I do not want this!  I want a good whole grain bread that has just a few simple ingredients that I understand. I can't find that in the store. Finding a bread that is 100% whole grain that does not have a load of  extra ingredients is hard to find.  I think I will make my own, but I am like so many who have tried to make bread with 100% whole grain flour and end up with bricks. So we go back to part white and part wheat flour in bread; Until recently when I discovered something.

One of the biggest culprits causing the problems with getting whole grains to make good bread is the yeast we are using. The overwhelming use of rapid rise dry yeast in the 1980's really changed the face of bread making. Before this you had a wet yeast, or yeast cake, now these are nearly obsolete. (In some parts of the country you can still buy yeast in a cake form).  Bread bakers and homemakers were constantly trying to get product out faster and faster. Waiting around for bread to raise was lost profits for companies and a pain for homemakers who had hungry mouths to feed. The advent of rapid rise yeast was a dream come true; now we can produce bread in less than half the time. The results were pretty good, but it changed the texture of the bread.  So they went back and changed the properties of the flour to keep up with the changes in the yeast and achive the desired results.

Most notable of the changes in the white flour is the addition of potassium bromade. Bread flour is the most common to have this chemical added. It works like a charm reacting with the yeast to make perfect bread. It makes the bread stronger and springier. It allows for very consistent results, it makes it easier for the machines to produce our bread. The bread will behave the same each and every time. which is imperative when you have a machine creating the product.  The problem with the stuff is that it is a toxic substance that is banned in several other countries. There are several states that are requiring labeling on the bag of flour you buy at the store, but what about the  comercially made bread? Often it is just labeled as enriched white flour.

I have avoided these troubles by grinding my own wheat into flour. I really enjoy the smell and experience of using fresh ground flour. Then I use a natural wet yeast. I grow my own yeast.  I love not having to rely on yeast from the store. It has been a learning experience. I will include links below so you can read about my  beginning experiences with the yeast.  I have finally got to where most of the time the bread turns out great.

I have to remember to slow down and let the yeast do its job in its own time because it is a living thing. Our food should be living. I should be able to see it growing. This is why I avoid most of the food-like stuff at the grocery store. I shop the perimeter and buy food that I know and understand. The produce section is my favorite part of the grocery store. I love being in touch with my food. It nourishes me on so many levels. I hope you will also let your food be nourishing to your body and soul.

my adventures with the natural yeast

making waffles with the natural yeast