OATS NOT JUST FOR BREAKFAST

Who knew; oats were used as a natural preservative. Back in the days before comercial preservatives, bakers would throw a bit of ground oats into their breads and cakes to keep them from going stale. When I make homemade bread I throw in some oats or oat flour. The bread  keeps several days longer than when I make it with only wheat. I also enjoy the flavor and added texture. 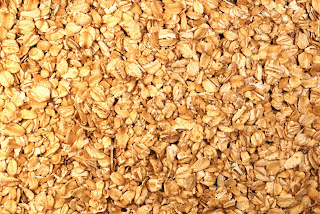 
Around the world oats have been used for natural remedies.
In Russia, oatmeal and mustard plaster is believed to stave off Pneumonia.
In Scotland, oats and rosewater are used to soften rough hands and knees.
In Japan, cold oatmeal stuffed in the nose is used to stop a nosebleed.
In Rio de Janerio oats are boiled in wine and used as a facial mask.
In Germany, oatmeal and fried onions are used to get rid of hangovers.
The French peasants chewed oats after eating garlic to freshen up their breath.

It is surprising to know that 85% of the crop grown in the United States is used for livestock feed.  It is a shame that we feed the good grains to our animals. Oats have been proven to lower cholesterol and fight heart disease. Oats are full of fiber and nutrition. It has many of the B vitamins, vitamin E, calcium and iron. Oats are a powerhouse of nutrition, but have been given a bad name, often being labeled as the food of the poor people. It is the easiest of all the grains to obtain right in your local grocery store, and one of the most beneficial.  I hope that you will take a second look at oats and what a great addition they can be in your diet and other areas of life.


TYPES OF OATS TO BUY


Old fashioned and quick cooking oats are the most popular form of oats. They are easily found in the cereal isle of your local grocery store. They are easily stored in your pantry right in the canister they come in. The others are found in bulk sections of the stores. Store in a container with a tight fitting lid.  Instant oatmeal has really taken off. They are convenient, but are so often full of chemical additives and flavors that I would shun them. You can make your own instant oatmeal packets by processing down the oats into smaller bits and adding your own flavorings. I will add a link below.  For a hurried morning you could also try a soaked method where you do not cook the oats in the morning, but soak the oats overnight and then it is softened and ready to go in the morning.  I will add a link for that also.

Oats are not just for breakfast, In the whole form, they make a great addition to soups and salads and breads. They can be used as a gluten free substitute for bread crumbs. They are great in many baked goods even beyond oatmeal cookies. They can add a delightful nutty flavor to many dishes.

Below are some helpful links, plus a recipe for a chocolate oat and nut crust that I thought sounded divine.

wise geek what are oats?

make your own instant oatmeal packets

in a food processor

Mix well, then press into the bottom and sides of a 9 inch pie plate
bake 5 minutes at 375